This option is added so output generated by FlexRIP, Nexus PostScript and TotalRIPs can be emulated.

In Imaging Engine V14.1.1, the angle direction option has been moved to the 'Image to Screened Separations ticket', and now this option has an effect on screened output. When switching from clockwise to counter clockwise, screen angle direction in the output bitmaps will change accordingly.

This document describes clockwise and counterclockwise screen angle direction, it explains how the option can be set and used in IE 14.1.1 and it documents current limitations when using this option on certain screens.

For more information on how tickets from previous versions are handled in Automation Engine 14.1.1, see

Screening angles are measured from the positive X-axis to the positive Y-axis. This is also called the device coordinate system.

Depending on the position of the X-axis and Y-axis, the screen angle direction can be clockwise or counterclockwise.

In this case, positive angles are interpreted as counterclockwise (CCW).

This screen angle direction is the default behaviour for screened output generated by Nexus RIP.

In this case, positive angles are interpreted as clockwise (CW).

This screen angle direction is the default behaviour for screened output generated by FlexRIP. 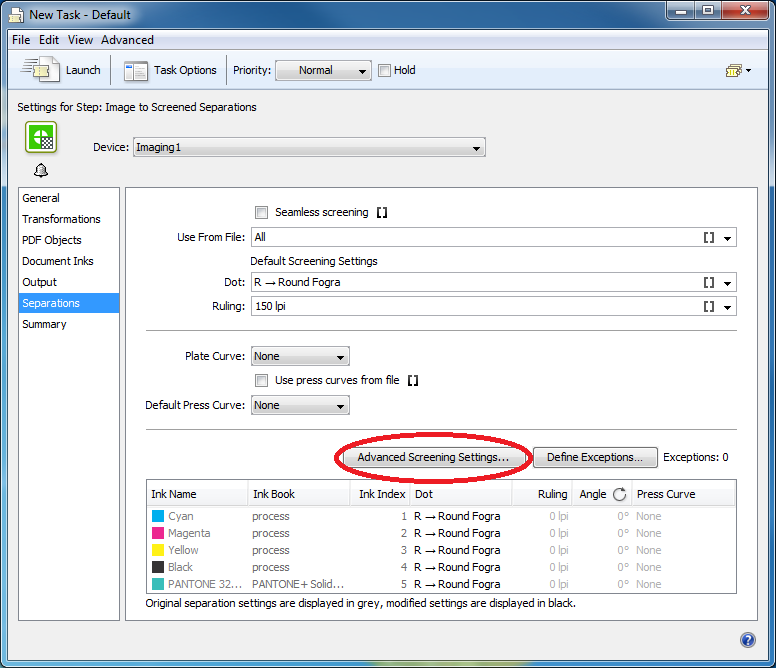 The Screen Angle Direction setting can be found by going to the Separations tab of the Image to Screened Separations ticket
and clicking the Advanced Screening Settings… button.

The Screen Angle Direction can be set by selecting the relevant setting from a popup menu. 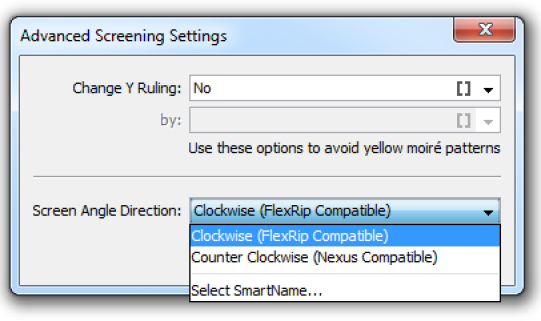 The setting allows the user to set the screen angles as used by the ticket to be determined by one of two methods:

It is also possible to use SmartNames to control the Screen Angle Direction setting of the ticket.

Screens that can only be used with clockwise screen angle direction

Screens grayed out when counter clockwise direction is selected

In the below example SCR03, SCR04, SCR05 and SCR06 are enabled while SCR07, SCR09 and SCR10 are grayed out.
All these screens are customized screens, setup and created in ScreenManager.

SCR03, SCR04, SCR05 and SCR06 are enabled because these custom screens support CCW angle direction: They do not use any surface screening effect, or these screens are based on a modulo 180 base dot.

SCR07, SCR09 and SCR10 are grayed out because these screens do not support CCW angle direction: They are based on a modulo 90 screens and they use surface screening effects. 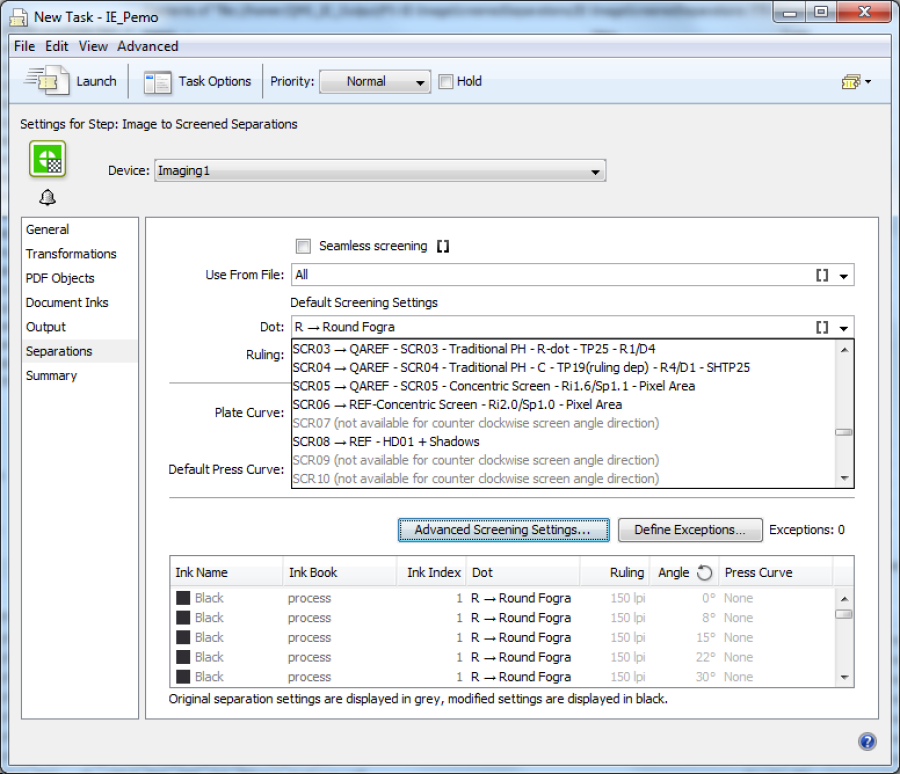 In the below example GVY screens are grayed out. These are static Groovy screens which do not support CCW angle direction.

All these screens are HDFlexo screens, verified and created from the HDFlexo application.

A user creates a ticket and selects screen HD07 (HD Flexo C76 MC12P – Dupont DPR – Flexibles-MV) as default dot.
This screen uses the surface screening effect MC12P.
When a user wants to change the screen angle direction in this ticket to CCW, the following warning message will be displayed:

Appearance of screen angle direction for different types of screens

The number of different screen angles that a specific screen supports depends on the type of screen: Does the screen use symmetric dot shapes, is it created as a modulo 90 or a modulo 180, does the screen uses orientation-sensitive effects.

Screens with symmetric dot shapes only have different screen orientations between 0° and 90°. When the dot shape is symmetric for all tones, there is no difference between for example a 45° and a 135° screen angle.
For these screens, switching from one screen angle direction to another is the same as mirroring the screen over its horizontal axis. 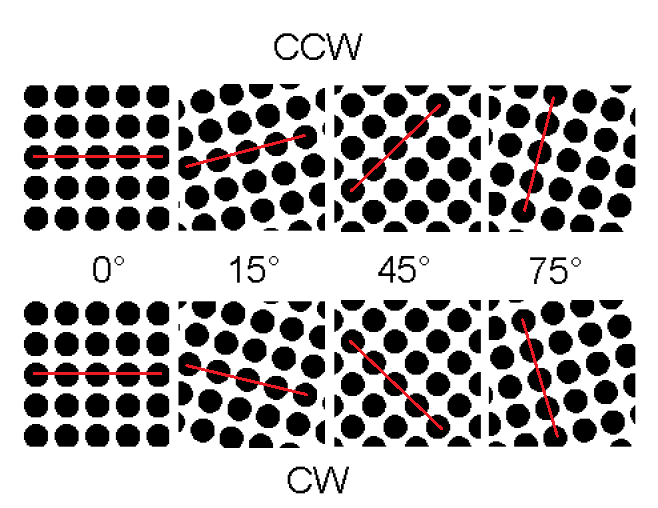 When using symmetric dot shapes at gray levels where inked dots are starting to touch each other (e.g. near 50%) irregular dot-bridging can occur. This can result in a graininess appearance or can result in unwanted tone changes.To prevent this, dot shapes are used that have a certain aspect ratio: The dots touch each other first in one direction then in the other. So dot bridging is guided and spread over a larger tone range (e.g. from 40% to 60%).
Some screens use an asymmetric dot shape over the whole tone range (e.g. D (Rugby) screen),other screens only use asymmetric shapes near mid tones (e.g. R (Round-Fogra) screen.

E.g. the D (Rugby) screen uses a dot shape with a certain aspect ratio (the shape is horizontally wider than vertically).

E.g. the R (Round-Fogra) screen uses a dot shape which is round in highlights and shadows, but near mid tones the shape has a slight aspect ratio: in horizontal direction dots will touch each other at lighter tones compared to vertical direction. 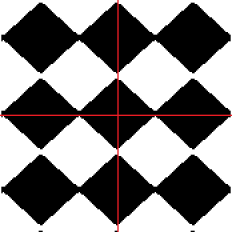 Chain direction of a screen 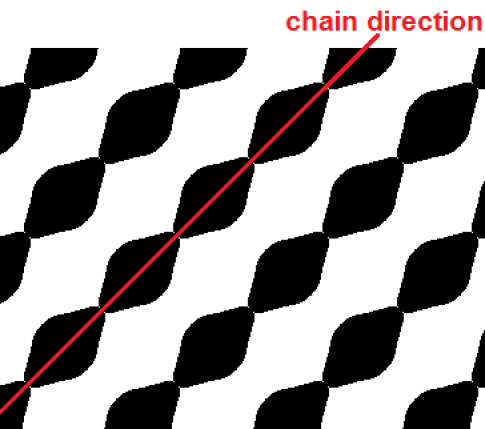 When printing with three or more inks, it is important to assign the correct screen angle for each of these inks: To print uniform colors and to make printing robust against registration errors, the screen angles of the different separations should be as far as possible from each other.

This can be illustrated with the below images: Each image represents two screens with a specific screen angle difference. From left to right, the screen angle difference is increased.
For screen angles close to each other (left most image) the moiré period is much larger than when using screen angles further away from each other (right most image).
For the left most image the color shift period (= the distance from printing dot-on-dot to dot-nexto-dot) is much larger than the screen period (= determined by screen ruling), and will become visible for human eye.
For the right image, the color shift period is much smaller and close to the screen ruling. 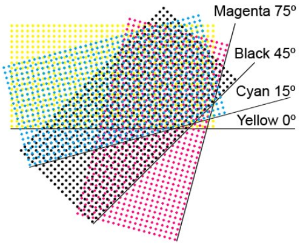 When asymmetric dot shapes are used then there are more different screen angles possible: from 0° to 180°.
The largest angle difference for the three most visible inks is then 60° (180°/3).

It is common practice to always select screen angles that are 60° away from each other, also for screens with symmetric dots.
This is also the case for Nexus RIP where the default angle sets for the most visible inks C,M,K have angles separated by 60°.

Requested screen angle is 15° CCW. We don't translate the screen angle into the new angle direction, but we will mirror the CW version of the screen:
15° CW screen is loaded first, then the screen is mirrored over the horizontal axis.
The output result is 15° CCW which is equal to the requested angle. 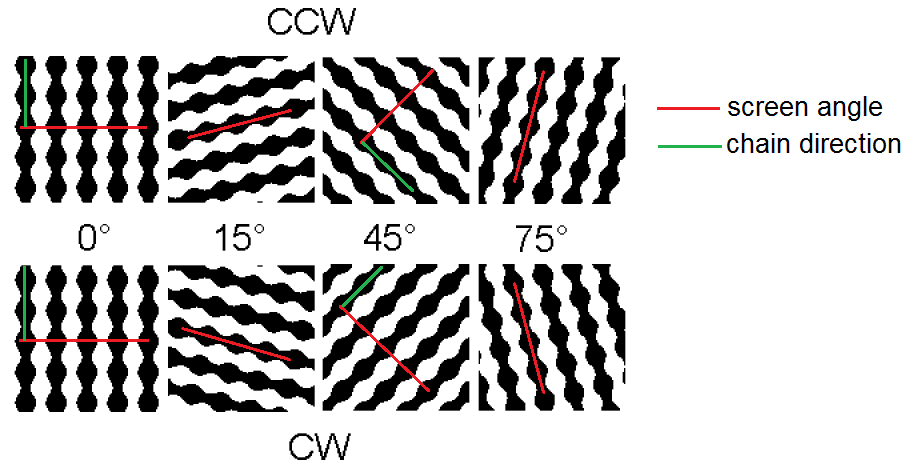 Modulo 180 screens are screens that have screen angles available from 0° to 180°.
These screens have typically asymmetric dot shapes over the complete tonal range. Examples of such screens are X (Eccentric), PARDIA35 (Paragon Diamond35). etc.

What is surface screening?

To improve ink transfer for solid objects, surface screening can be used: The solid object is filled or perforated with a specific pattern so that ink transfer is more efficient, with less pin holing.The below images show the difference between a plain solid object and a solid object painted with Groovy screens

Surface screening integrated in a screen

Below is an example of a Groovy screen that is used with the E (Elliptical) dot as it would appear on the digital file.

A screen that uses surface screening effects must be carefully setup:
To have the ink transferred from plate to substrate in the most optimal way, the pattern that perforates solids must match the specific inking system of the printing condition.
For e.g. the pattern frequency and orientation must match the grid and cell volume of the used anilox.
This setup is mostly done by trying several different surface screening patterns (different shapes, different frequencies, different orientations), and from the print results derive the pattern that results in the most optimal solid ink transfer.

The optimal pattern orientation is not always the same as the screen angle direction used for the separation.
In many cases the most optimal orientation for the line pattern of Groovy screens should be about 45°, no matter what ink is used, no matter what screen angle is used.
In the above example, an elliptical screen at 82.5° CW is used, but the line pattern must be kept at 45°.

Screens that use surface screening effects are created and setup with the ScreenManager or HDFlexo application.
These tools use CW as screen angle direction.

To guarantee that the surface screening pattern orientation used in custom screens or HDFlexo screens is kept exactly the same as during setup, such screens will be prevented from being used CCW.
That is because Modulo 90 screens that change from CCW to CW angle direction are mirrored by IE, and this would change the surface screening pattern orientation.

These screens were introduced with FlexRIP and were created from the CO (Endless) dot.
FlexRIP uses CW screen angle convention, and the CO dot is a modulo 90 screen, so these static Groovy screens only have screen angles from 0° to 90°.

If this screen is to be used with CCW screen angle direction IE would mirror the screen over the horizontal axis.
This would also change the direction of the groovy lines which could result in different printing characteristics.
Therefore static Groovy screens can only be used CW.

These are screens that have been setup  and created with ScreenManager.

These screens have a dot code that starts with 'SCR'.

Which type of customized screens only supports CW

If the original dot of a custom screen is a modulo 90 screen and if custom screens uses surface screening then the screen can only be used CW.

If the original dot of the custom screen is a modulo 180 screen or the screen does not use surface screening then the screen can be used CCW and CW.

In ScreenManager you can easily see if the selected original dot is a modulo 180 screen.
Select the screen and verify the screen details panel on the right.
If a screen is modulo 90 the angles column will only show screen angles from 0 to 90.

How to know if a customized screen uses surface screening effects

It is not always possible to know from the screens name if a custom screen uses surface screening effects.
That is because a user is free to choose the screen name when a customized screen is created.

This can be found out by selecting the screen in ScreenManager:
A customized screen that uses surface screening will have the 'Surface Screening' tab highlighted. 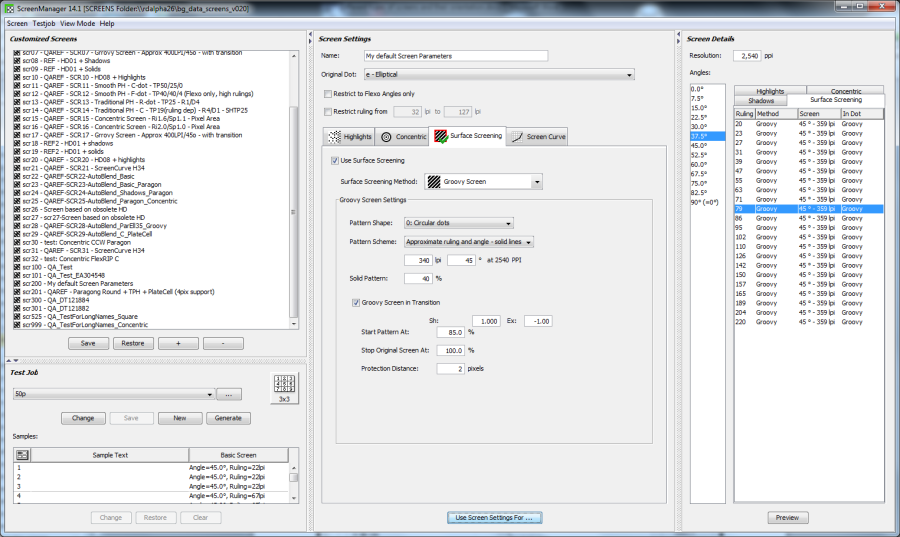 These are screens that are created with the HDFlexo tool.

These screens have a dot code that starts with 'HD'.

Which type of HDFlexo screens only support CW

HDFlexo screens that use surface screening effects can only be used CW.

A special type of HDFlexo screens are FullHDFlexo screens.
These screens can be added to the HDFlexo application via the FullHDFlexo FTD Addon package. They are added under the plate type 'FullHDFlexo (Inline UV)'.
These are screens created specially for FullHDFlexo enabled CDI devices and use dedicated surface screening patterns.
e.g. patterns WSI, MG45, MG34 enabling P+ CDI technology.

FullHDFlexo screens can only be used in CW screen angle direction.

Screens from 3rd party FTD addon packages can only be used in CW screen angle direction.

How to know if a HDFlexo screen uses surface screening effects 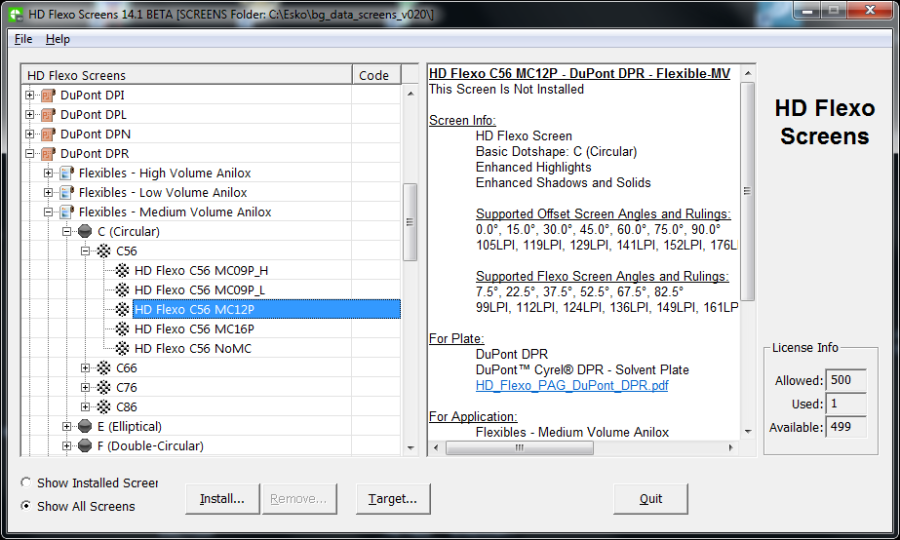