KB213975930: ArtiosCAD - Are there any parametric or rebuild limitations using ArtiosCAD canvas

Are there any parametric limitations using ArtiosCAD canvas?

The terms rebuildable, resizable and parametric should be considered interchangeable.

Prior to 16.1.1, rebuildability within a canvas was maintained at the canvas level. This means all variables, e.g: LWD, were shared by all parts.  Parametric ARDs which were imported into the canvas were stripped of their parametrics.  Parts could not contain different boards and they all shared the canvas board.

Starting with ArtiosCAD 16.1.1, parametric ARDs can be imported into a canvas as a new part.  Standards can also be run into the canvas.  The parametric information will be maintained and the part will be rebuildable within the canvas. Parts could contain different boards within the same canvas.

However, some parametric limitations do exist which this article will address.

ArtiosCAD 16.1.1 allows each part to have its own board definition that is different from the canvas board.  However only one log file exists.

For each part that is newly created in the canvas that might define geometry in terms of CAL, the underlying command in the log resolves CAL to CAL(x) where x refers to the part Id within the canvas. The other board allowance variables, IL and OG are resolved in this way. 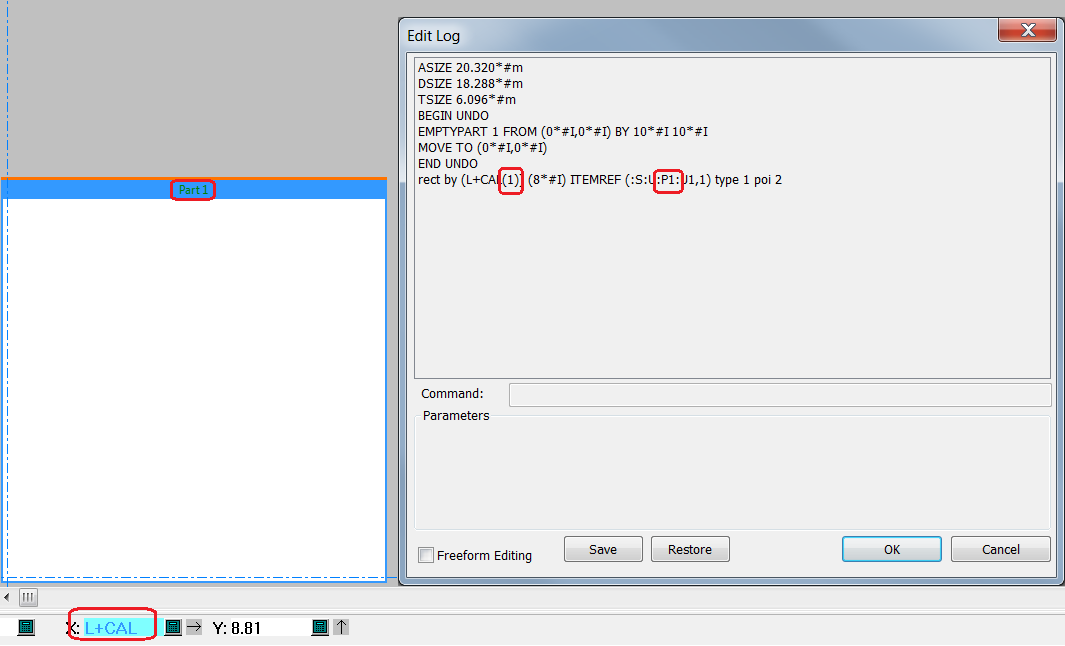 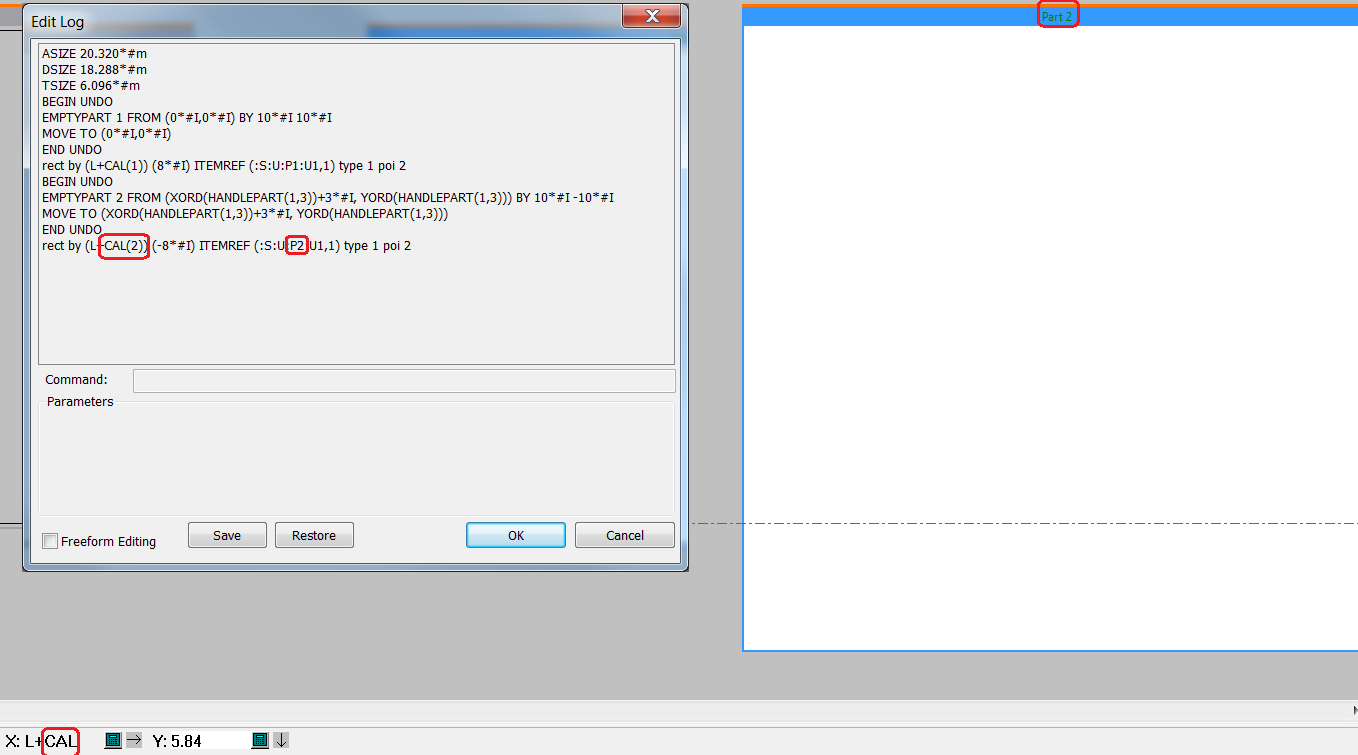 Create a new third part by either running a standard or importing an existing rebuildable design as a new rebuildable part into the canvas:

ArtiosCAD can only resolve to CAL(x) where x = the part Id when the user starts a canvas anew and drafts all the parts from scratch as above or when a parametric ARD is imported into the canvas as a new part as below.

If CAL is part of any of the prompts, the designer need only enter CAL and ArtiosCAD will resolve CAL to the proper CAL(x) within the log file. The designer does not need to remember the underlying part Id.

Let's assume a simple cutout is created in part 2. 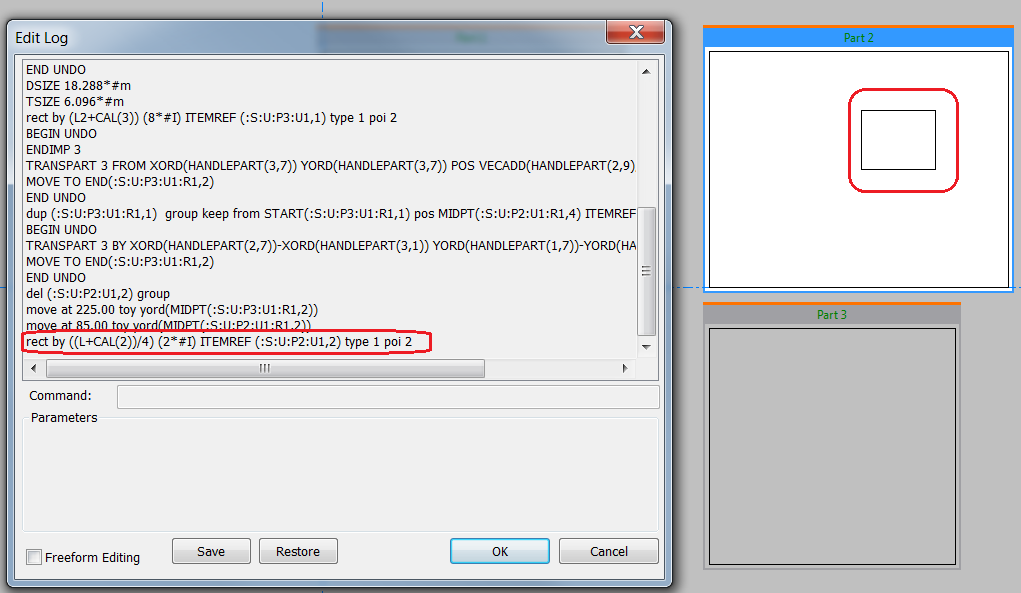 Note that the rectangle will be further resolved to item reference :S:U:P3:U1:R2,1-4.

Now copy the cutout from part 2 to part 3.  The operation is logged as such: 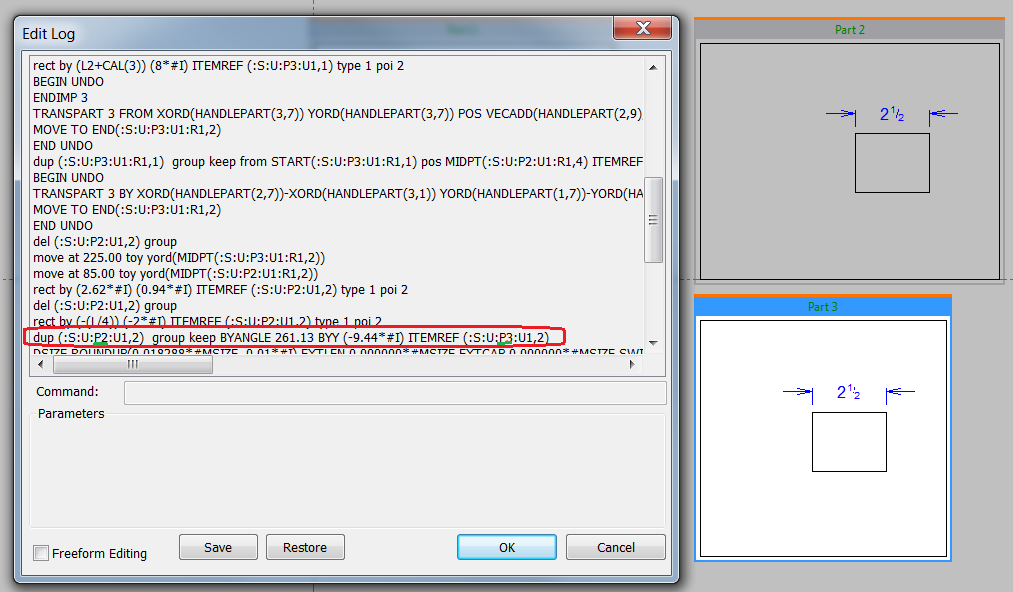 Editing operations by which geometry of the source part does not assume CAL of the destination part: 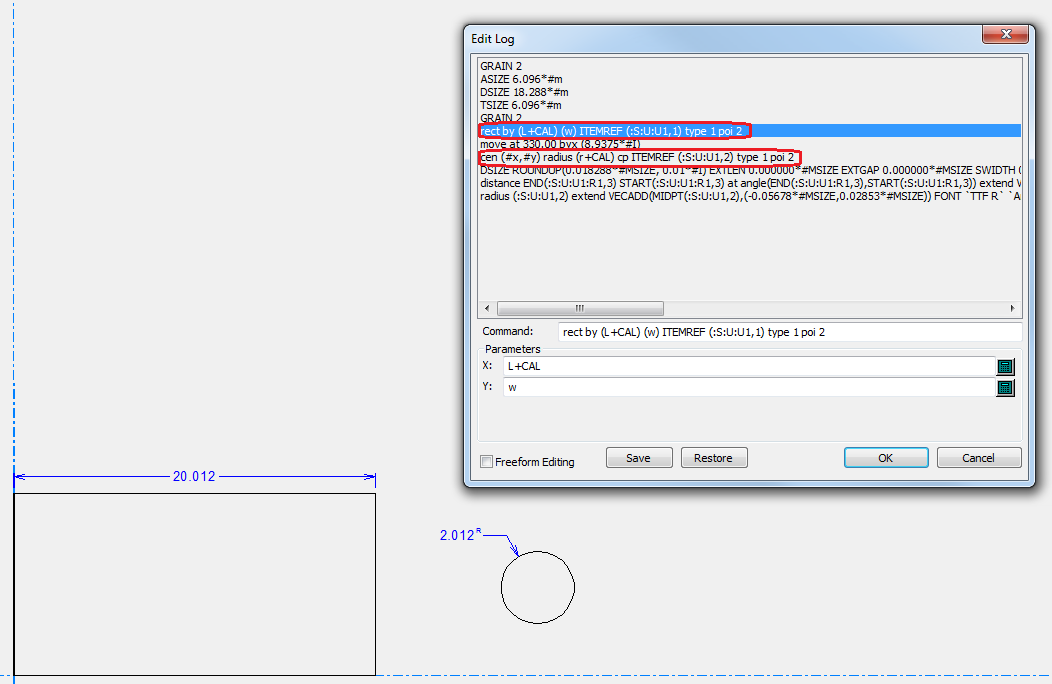 When this design is converted to a canvas, note that CAL(x) is the same for both parts ( CAL(1) ) within the logfile , even though logically these are two distinct parts.  This is because at the time the contours were drafted in the ARD, both shared the same material as an ARD only allows one material.  It is assumed that at the time of converting to a canvas, the expressions that were defined during the drafting of the geometry in the ARD were created in terms of one CAL.  The commands in the logfile are changed to CAL(1), to reference the first part created. 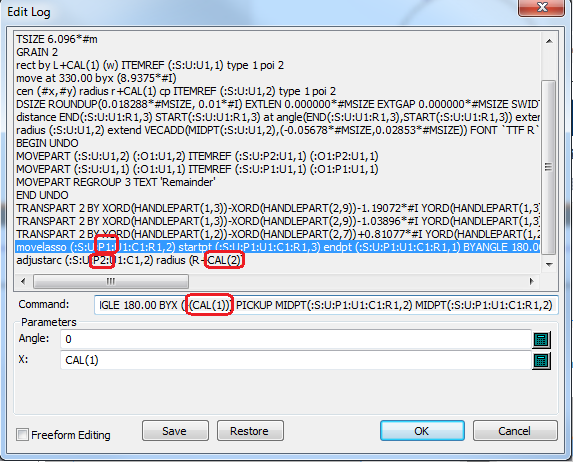 If a given contour in an ARD is copied N different times via the Copy tool, when converting to a canvas, the copied parts, although technically duplicates, are construed individually and are considered N separate parts:

If a given contour in an ARD is copied 1 different times via the Copy times offset tool, using N copies, when converting to a canvas the copied part will be aggregated into one part with a count of N.

Parts that have been design parametrically within a canvas may be saved as individualized ARD files.  However, any parametrics will be stripped from the ARD file and the ARD itself will not be resizable.

This limitation is due to the fact that canvas parts will more likely than not be drafted and logged with references to points in other parts, canvas conlines or dynamic drafting.  None of these points will be available to the part when saved as an individual ARD, thus the resulting log file of said ARD will be incorrect.  For the moment, there is no way to resolved these points correctly.

"Rebuilding" by part with differing boards

Once a part has been defined allowance using a part ID for example CAL(x), the board may be changed, allowing the new board allowances to influence the design in a a rebuild.

With 16.1.1, creating a canvas by importing a standard or existing rebuildable designs resulting in the logging of new import log commands which were introduced to be able to identify the part and maintain its parametric information.   This means ArtiosCAD versions prior to 16.1.1 which support the canvas format will not be able to rebuild a canvas file created in 16.1.1 and later.

Canvas files created in ArtiosCAD versions prior to 16.1.1 will rebuild in 16.1.1

Running Laserpoint , IQ or DWB standards into a canvas

Only pure standards based on the ARD format can be used in a canvas.  Neither Laserpoint, IQ, DWB standards nor ARD standards derived from the previously mentioned formats may be run into a canvas.