Back to Esko Support

Before Imaging Engine 16, we had a workaround to convert the OptiRange settings via CurvePilot. See

Imaging Engine 16 allows to specify tone range corrections directly from the Imaging Engine ticket in a similar way as OptiRange.
These options are available in the Corrections tab, by specifying Minimum and Maximum Correction.

Comparison of OptiRange in Nexus and Range Corrections in Imaging Engine

How to check OptiRange settings in Nexus

On Nexus, the effect of using OptiRange (combined with other curves or not) can be viewed by doing the following:

In the above example, the following OptiRange settings are used:

In the above example, this directly translates to:

The 'Minimum Tone' must be set accurately: a wrong or rounded value can result in considerably different behavior in output compared to Nexus output

The next chapters explain why and how.

'Sysval' on Nexus OptiRange is expressed as ‘CT’ steps, referring to the number of levels of 8-bit images and tints.

To have the same output on Imaging Engine, we must convert Sysval to an accurate Minimum Tone value, keeping into account the tones where one CT changes into another.

In the below example, we use the following values: 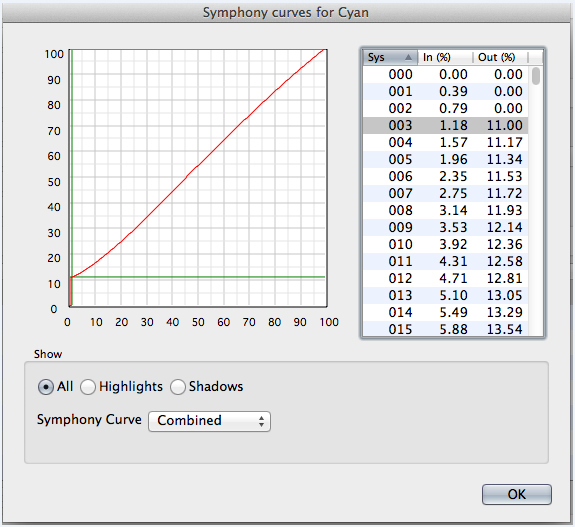 It is critical to copy this exact tone value as 'Minimum Tone' or 'Keep 0% to' value.
Rounding this number can result in considerably different output.

As example, we investigate what happens if we use the rounded value of 1.2% as 'Minimum Tone' or 'Keep 0% ' of our curve.
In the RIP the effect of using such curve is that also CT steps of 3 will be dropped to 0%. That is because a CT step of 3 is equivalent to a tone of 1.176%, and the Minimum Tone was set at 1.2%
Only at the 4th CT step (at  1.57%) the RIP will start to generate output, and the gray level or screen% for this 4th CT step will be higher than the Minimum Dot.

Conclusion: you will get a different result in Nexus.

You can preview this behavior in CurvePilot, via the ‘Preview Combined Curves’ tool.
In this tool, you must set the ‘numbers of compensation values’ to 256 to see the real effect of the curve on the output.
See screenshot below. 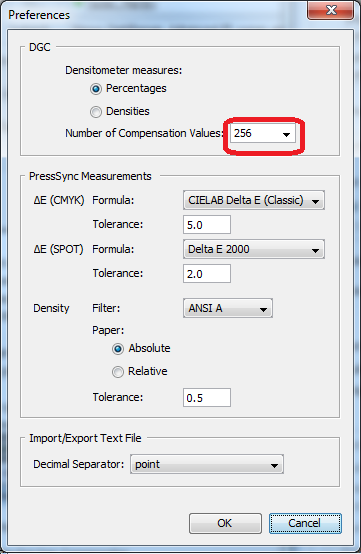 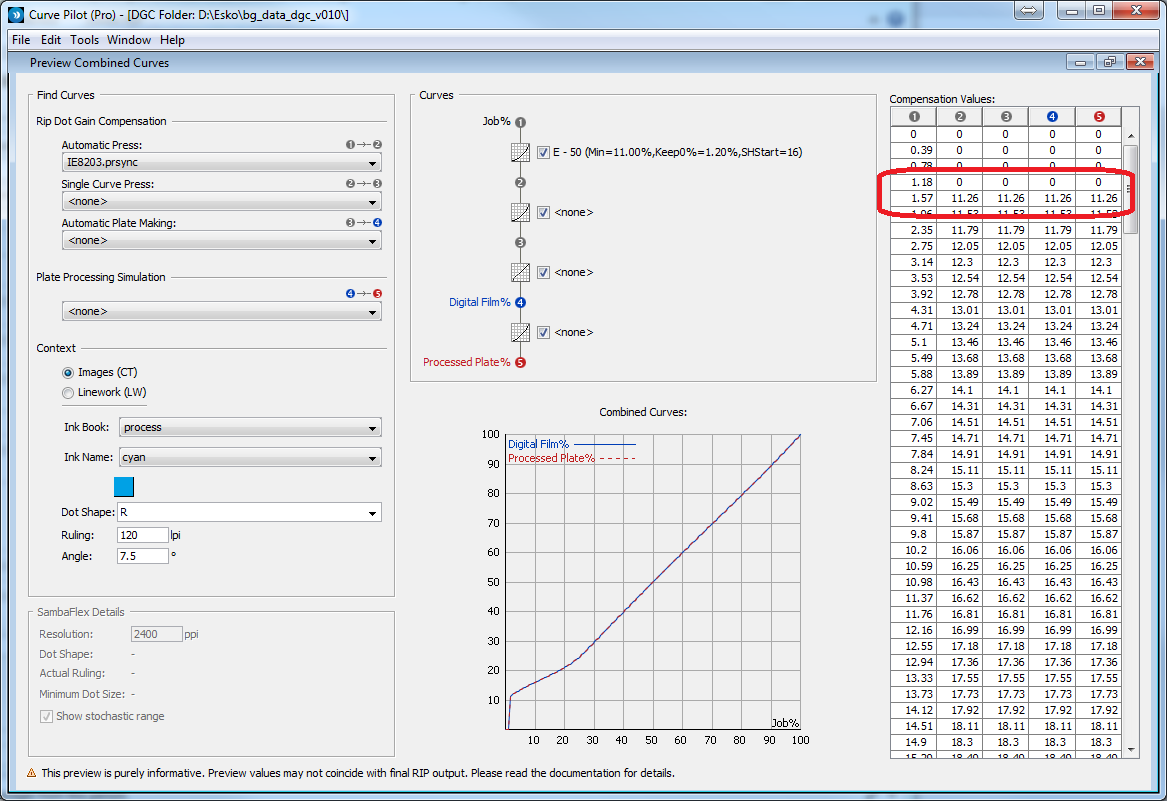 Translating Sysval accurately and how to verify

We repeat the above example, with the following OptiRange settings:

We can verify the output with the Preview Combined Curves tool in Curve Pilot:

In the Compensation Values Table we see that at an input tone of 1.18% (3rd CT step), the output is exactly 11%, equals to Mindot. 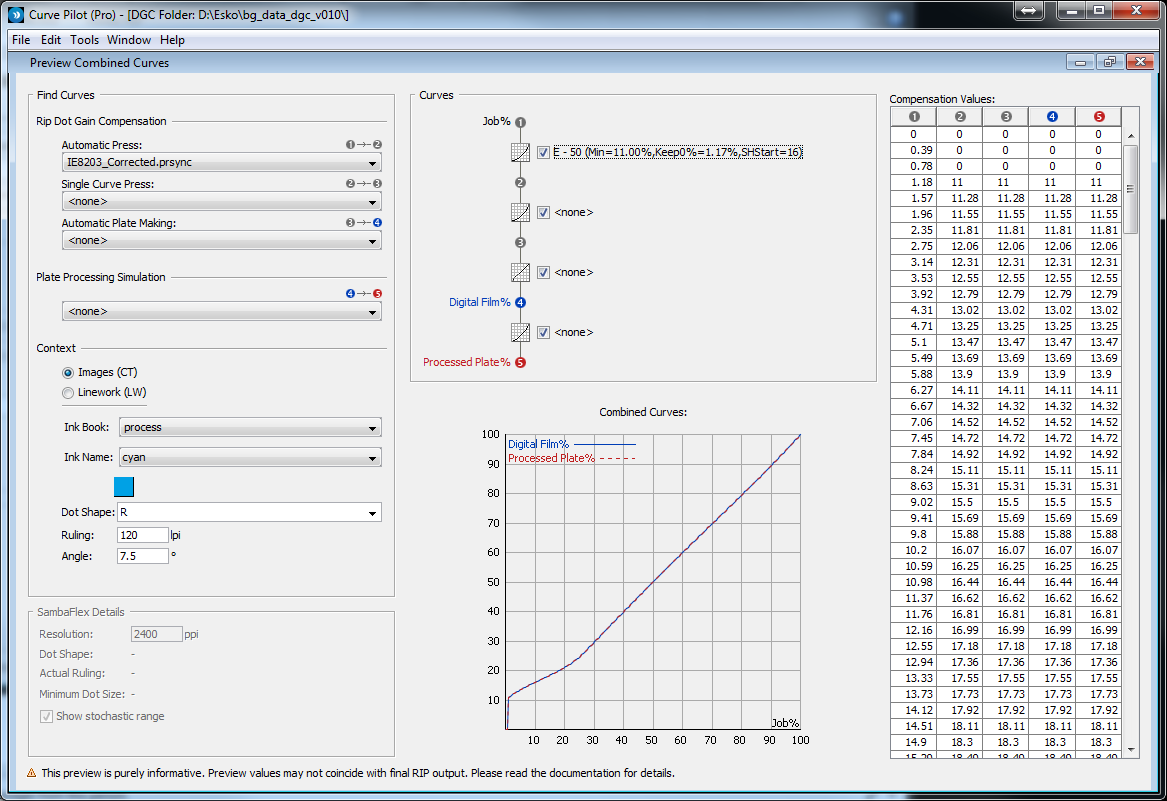 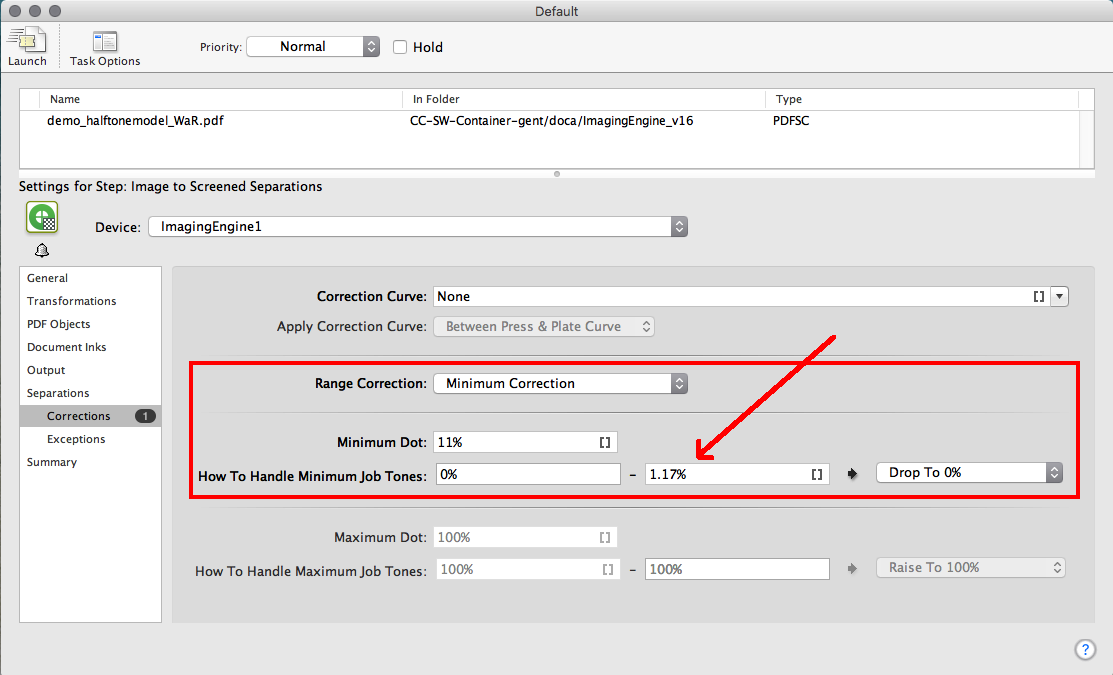 To do the calculation for other SYSVAL values: