Users often find that they are getting incorrect results from NexusRIP when using Object-Based Screening in jobs containing transparent or masked objects.

Description of a job

Object B is in overprint and partially overlaps object A.

This does not cause any problems:
Object B is overprinting Object A, so Object B’s screening parameters will be used to screen the whole of Object B, including the area where the two objects overlap.

What happens if Object B contains a transparency, e.g. a blend mode and an opacity of e.g. 50%?

By default, NexusRIP will apply the Screening Set for the topmost object in the transparent area. Often, this is what the user expects to happen, and the job will not be considered to have RIPped incorrectly, but in those cases where the user expects a different result, this will often be reported as a bug.

It is important to understand that NexusRIP determines the screening characteristics on an object level, not on a pixel level.

What happens if Object B is completely transparent e.g. use of transparency masks?

If an object is masked so that only a small area of it is to be printed, it is easy to forget that the object itself is still larger than the printed area. Of course, any part of the object which does not print (because it are masked out) is transparent. If the masked object has screening applied which is different to the screening applied to any objects which are underneath the transparent area, a problem of clashing screens will occur and the file will not be correctly RIPped.

It’s not an obvious problem that is easily detected because there is no reason to suspect any clash in the screening at all.

This is caused by the NexusRIP checking screening parameters at the object level. Unfortunately, there is no direct solution to this.

NexusRIP determines screening characteristics on an object level, not a pixel level.

The only way to prevent the problem would be to make the RIP test the transparency level of each individual pixel of all overlapping objects on a pixel level, which would result in unacceptably slow RIPping times, especially at higher resolutions. And even if this method was available, there is the problem of how to handle soft-edged masks, where the issue of mixing screens would occur.

NexusRIP can offer an easy way to identify such kind of problem jobs in the PDF RIP so the operator can inspect the job and resolve the problem, rather than risk the job being RIPped with incorrect screening.

The TotalRIP activity contains an option called Fail if Clashing Object Based Screens which will cause jobs to fail with an error if the NexusRIP detects clashing screens. 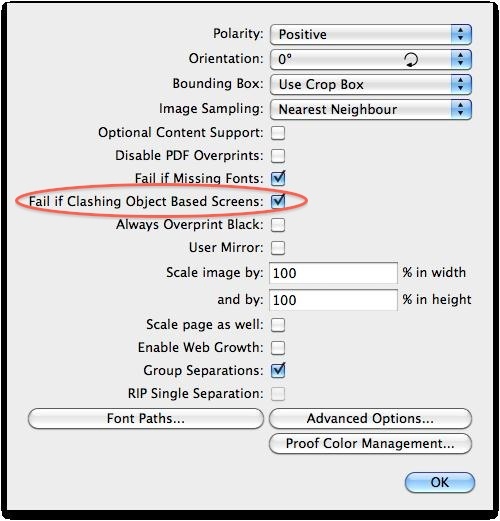 To enable the option:

If you are routinely using object-based screening, it is recommended that you enable this option in all you PDF RIP workflows.
It won’t solve the problem, but it means that problem jobs won’t get RIPped.