When a job is ripped with screening, it can often happen that very small or broken dots sometimes called 'scum dots' can appear in highlight areas. These dots can be smaller than the minimum dot size that can be held on a flexo plate, which can cause ‘dragging’ and other unwanted effects when the job is printed.

Simply removing all dots below a particular size is not a good solution, since this can result in support dots and micro-surface screening effects being removed as well.

To prevent problems caused by too-small dots, Esko has developed a feature for Imaging Engine called Dot Clean-Up. When enabled, Dot Clean-Up will look inside the output files generated by the Image to Screened Separations ticket and identify and remove those dots that are too small to be printed. 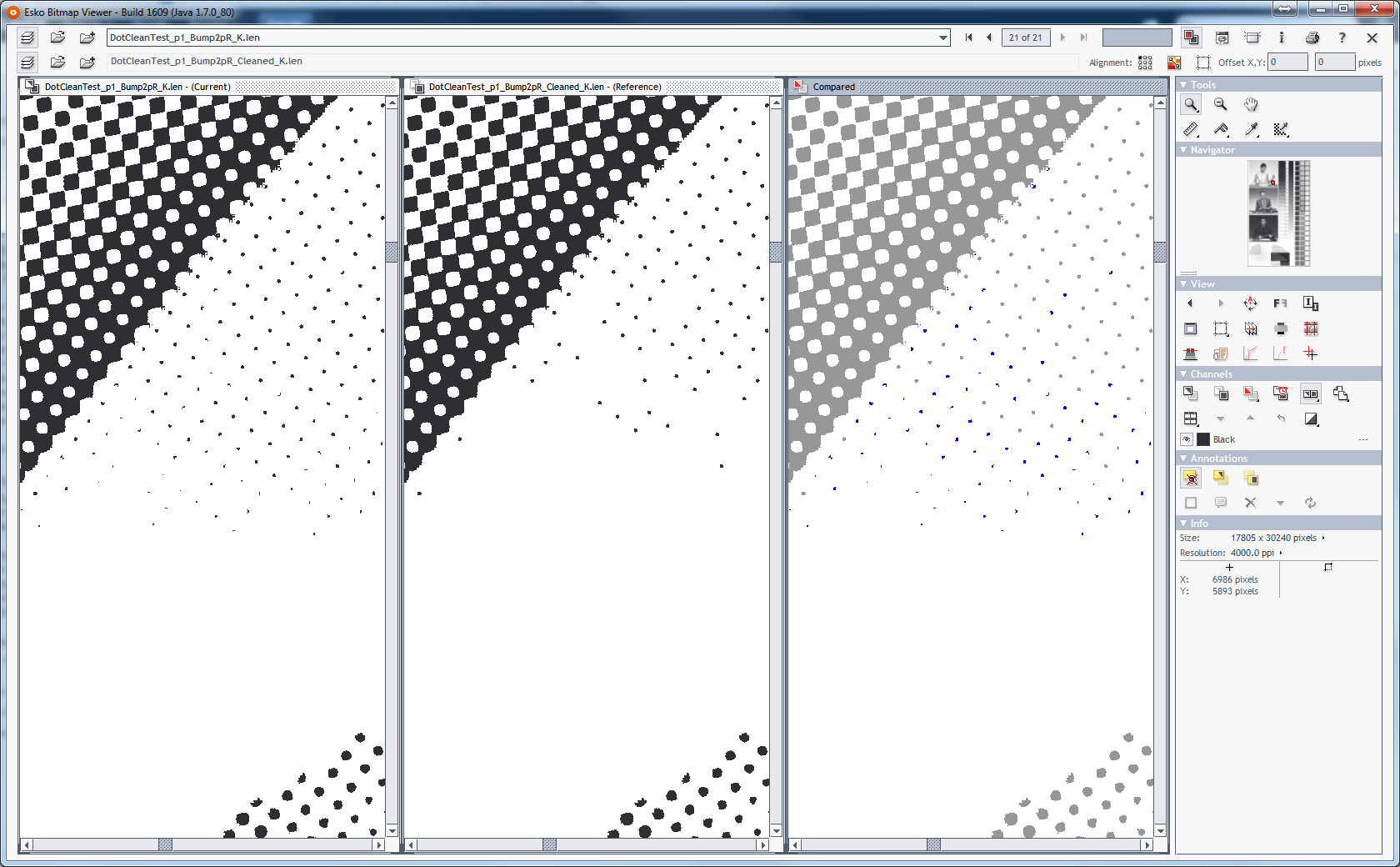 In the above screenshot, the unprocessed output with unwanted small dots is on the left with the output after Dot Clean-Up in the center. The right-hand pane highlights the differences between the two files in blue.

Dot Clean-Up can be found in the Post-RIP tab of the Image to Screened Separations ticket if the required license is available.

If the feature is enabled, the screened output from the rip will be passed through the Dot Clean-Up function and small dots will be removed according to the parameters set for the feature. Note that this can add some time to the process of ripping a screened job, so it should only be applied if needed. 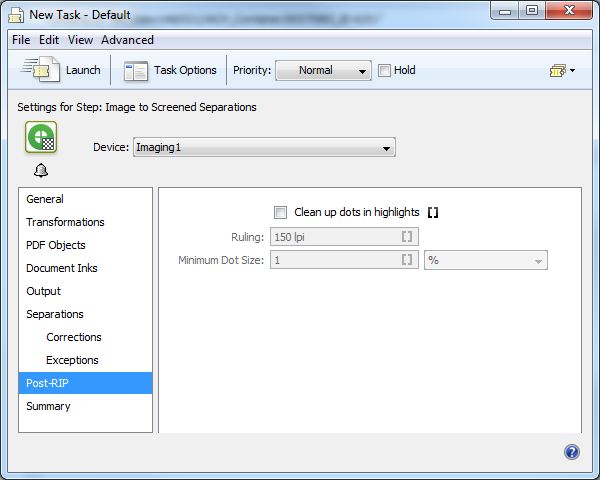 The feature can be enabled by enabling the Clean up dots in highlights check box. This can also be enabled by means of a SmartName.

When the Dot Clean-Up function is launched, an 'isolation distance', marked as 'i' in the diagrams below, is calculated as the currently selected rip resolution divided by the ruling as defined in the Dot Clean-Up Ruling parameter.

In the below diagrams, 'i' is the isolation distance, and 'd' is the minimum dot size as defined in the Dot Clean-Up parameters.

This should be set to the smallest allowable screen dot size. It can be defined in terms of pixels in the output file, the percentage value of the smallest allowable dot, or as a real size in microns. If a value is entered for one of the units, the values for the other units will be calculated automatically, based on the Ruling value set in the Dot Clean-Up parameters and the ripping resolution that is defined in the ticket. For example, for a screen ruling of 175lpi and a ripping resolution of 4000dpi, a minimum dot size of 3% will also be calculated to be 28.367 microns or 16 pixels.

The diagram below illustrates how the dot size and the number of pixels relate to one another. 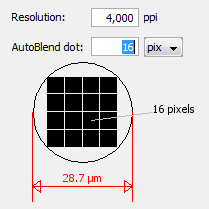 Screen dots smaller than the defined Minimum Dot Size will be removed, while small dots that are used for support or as part of a screen’s surface effects will be retained.

A problem with the current implementation means that it is possible that HDFlexo screens which use FM in highlights or otherwise use a minimum dot size can occasionally generate dots that are one pixel smaller than the stated minimum size, which will result in these dots being removed by the Dot Clean-Up tool.

To prevent this, users should regenerate any HDFlexo or Full HDFlexo screens that have a minimum dot size (in the latest version of HD Flexo Screens where the problem is fixed), if they intend to use them with the Dot Clean-Up tool.

Dot Clean-Up requires the purchase of an additional license.