KB186581771: ArtiosCAD - How to use a rebuildable canvas in 3D with a parametric number of parts

An ArtiosCAD canvas is well-suited for designing multiple parts of a display in one drafting area.  When using a canvas, a user can specify one part with a count, N.  So when multiple shelves are needed in display, only one part needs to be drafted and said part can have a count of N. This means that only one ARD will be created rather than N files of the same design.

But can both concepts coexist?  How can a rebuildable canvas be used when the number of parts is parametric? Parametric parts can conflict with the canvas part count.

The situation described in this article is a very advanced case. There are steps along the way that can leave the canvas and 3D files out of sync.

The reader should be willing to invest the time to fully understand the article before intermingling part counts and parametric copies of the same part and be prepared to experiment with the various steps to achieve the desired result.

Run the File > Run a Standard > Display Standards > Standalone Displays > Display Stand with Trays with N = 4. The result will be an ARD file with four trays and four slots in the base to hold the trays. 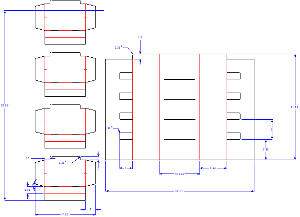 The user can navigate to File > Convert To > Canvas:

All shelves are added as one part. This is because there is a dimension that spans all four shelves. ArtiosCAD considers this one part since they are linked by the dimension. 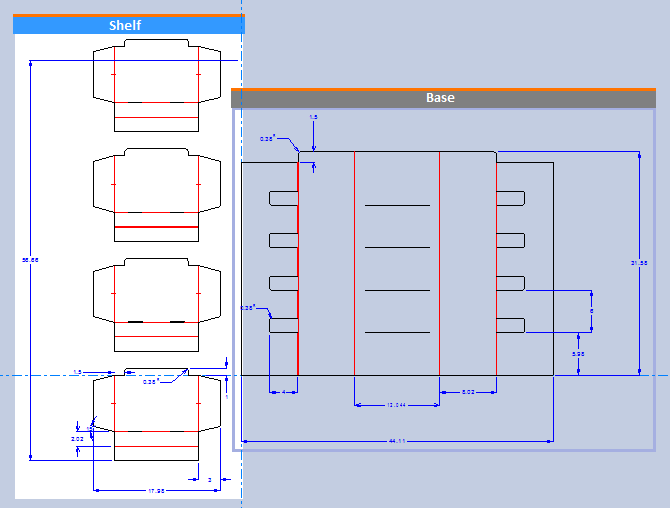 The user should remove the linking dimension before converting to canvas. Doing so will allow each tray to be a unique part.

Otherwise, ArtiosCAD will think that what is logically separate copies of a shelf, is in fact one part with deleted geometry rather than N number of parts. This is the desired part configuration: 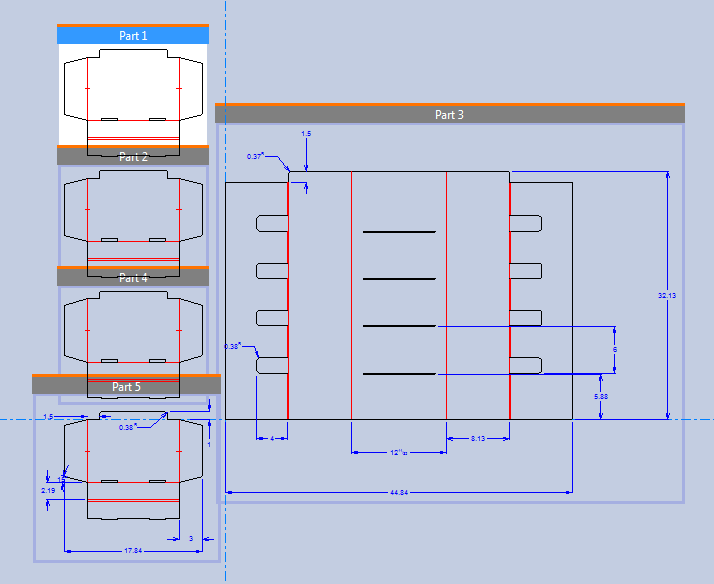 For parts 1-4, the user should right click on each, delete part and then Navigate to the parts list where the part names can be changed and the part count can be changed.

Navigate to the Parts List and set the shelf count to 4.

The user can convert the canvas to 3D via File > Convert to 3D.  He will see this: 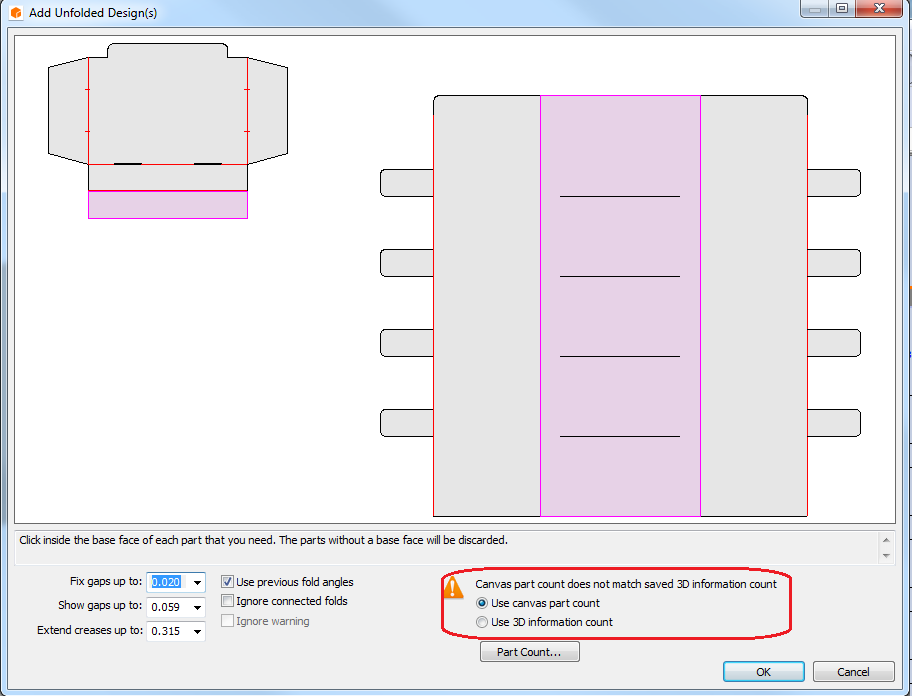 Note the warning. Since the standards have 3D information in them, when three shelves were deleted, the 3D information was reduced by three.  So ArtiosCAD is asking which count is correct, the number of parts in the canvas or 3D?  Stick with Use Canvas part count.

ArtiosCAD will honor the number of trays in its part count and create four shelves in 3D.

The net result is the same. Whether the user has four different sets of geometry for the same shelf drafted in the canvas or one set with a part count of four, four different shelves can be assembled to the base.

But what if the user wants five trays? Can't he just set the part count in the canvas to five? No. The user needs to rebuild so that any related structure is also resized. For example, look at the base above. It needs to be resized with five slots as well.

The user can rebuild in 3D (Tools > Rebuild)

Set N = 5. ArtiosCAD will create the base with five slots, but there are still four shelves. If the canvas file is examined, the shelf part is still four and a non-production remainder part has been created. 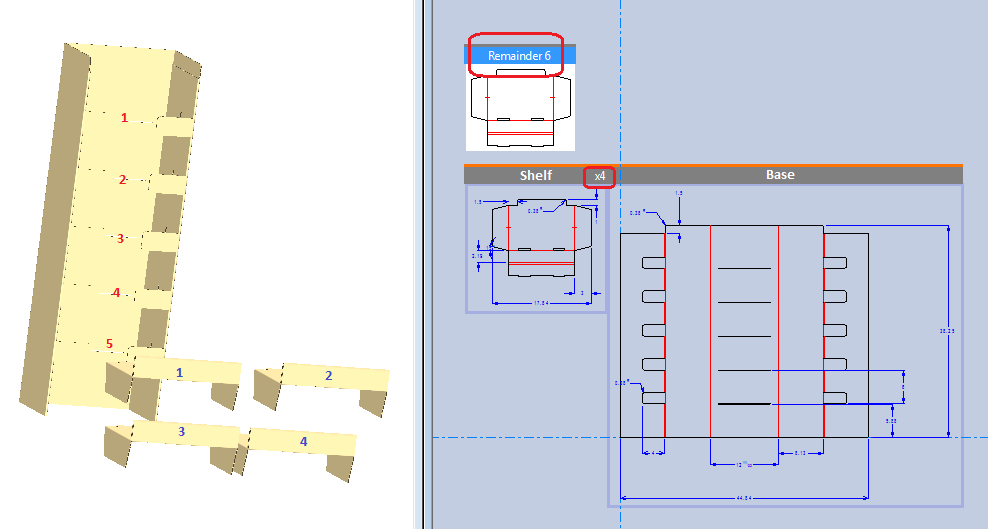 Why? This is because ArtiosCAD can't quite correlate the part count with the parametric number of copies.  It doesn't know that the new geometry it created is really just a copy of an existing part. The log file directs ArtiosCAD to create new geometry and said geometry is moved to a non-production remainder part.

Update the number of copies for the shelf in the parts list based on the desired number of shelves used in the variable N.

The remainder part should be left intact within the canvas. It is just a placeholder for additional parametric copies of a part. Since the part is considered non-production, it is ignored during a convert to 3D and the canvas part count will be used instead.

Rebuild from the canvas

The user could duplicate a part in 3D via the Duplicate Designs tool. 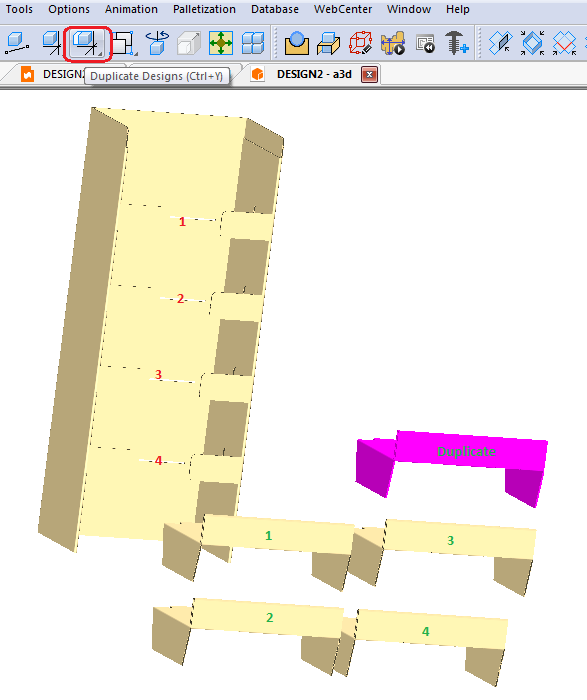 But note that a parametric mismatch still exists. There are now five shelves but only four slots.

The starting point of this workflow should be creating new copies of the part via a rebuild. But let's examine what would happen if a user duplicates a part and then decided to rebuild.

ArtiosCAD detects that there are five 3D parts, but only four in the canvas and the user is asked to update the canvas.

The user should click Yes and the canvas part count will be updated. 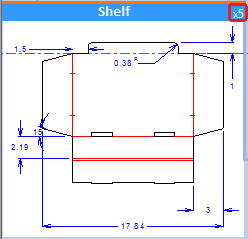 When presented with the rebuild dialog, set N = 5.  In this particular standard, N is the variable which controls the number of shelf copies. 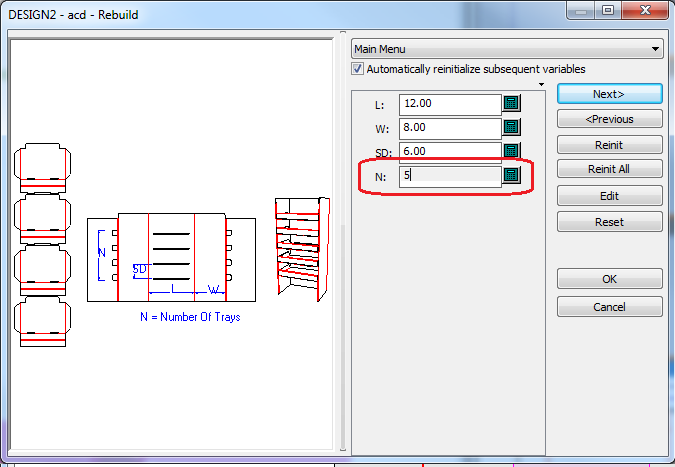 Click OK and the display will now have five slots and five shelves and the canvas parametric value N and the number of copies of the canvas part will also be five. Everything will be synchronized.

What would happen if the user duplicated a part in 3D and saved the 3D without rebuilding?

Let's examine the case again where the user duplicates the shelf in 3D.

If the user just closes the 3D, he will be asked to update the part count and save the fold angles and view settings:

If the user deselects the Save 3D design count to canvas part count checkbox, then:

If the user selects the same checkbox, then: