In v18.1.1, based on customer feedback, some improvements were done to the way that selecting a Printing Condition affects the separation settings in the task Image to Screened Separations.

Initially we assumed that using a Printing Condition would remove the need for object based screening. However, the screens contained in a Printing Condition are typically FM-based screens and those are not always the preferred solution for specific cases like shadow blends or very fine text. These objects are preferably imaged with AM screens that are assigned to the object in the input file.

In v18.0.1, selecting a Printing Condition automatically generated a set of Exceptions and those always overruled the settings from the file. And you could not change (edit) those Exceptions. 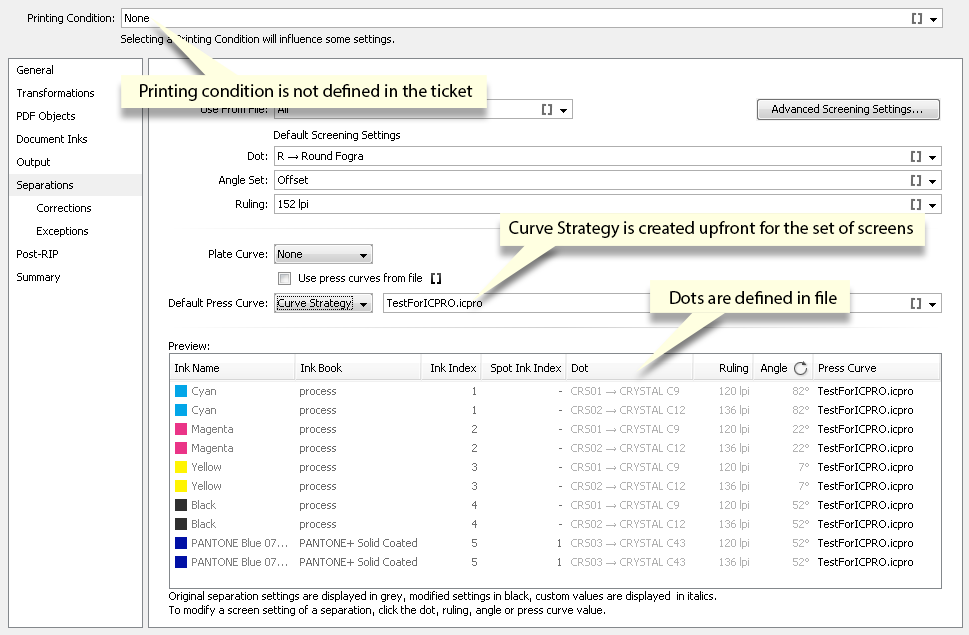 The only (cumbersome) way to work around this and get the object based screening from the file through was to set the Printing Condition to 'None' and manually remove all of those exceptions. For further details about this workflow, see: How to apply PCW screen and curve using object based screening/calibration?

In v18.1.1, this cumbersome workaround is no longer needed: the Printing Condition will now only set the default or fallback values for Dot, Ruling and Press curve for every separations. This means the object based screening settings from the file will get priority over these default values when using the options "All", "Angle only", "Ruling" or "Angle and Ruling" for "Use From File".

In addition, you can still overrule by editing the values in the Preview table or by specifying exceptions in the Exceptions tab, just like before.

A typical ticket that combines Printing Condition with a file with object based screening: 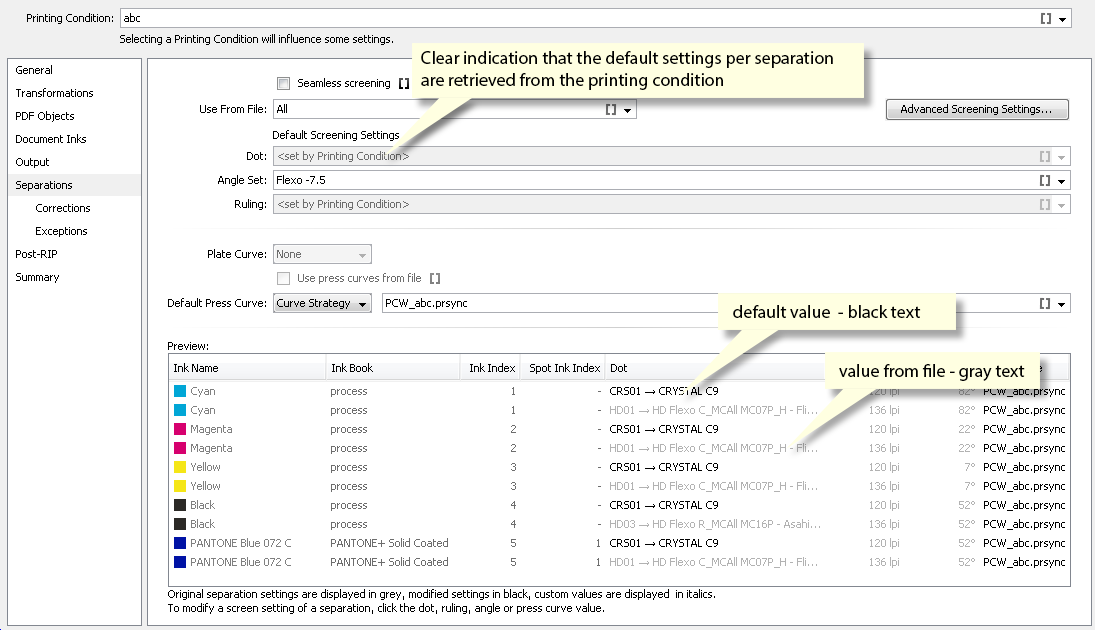 A manual edit in the Preview:

An exception, set in the tab Exceptions:

In case the file has different rulings or screen dots and you want to apply different curves in the Imaging Engine ticket:

As a printing condition currently doesn't support different rulings, you may want to apply a different PCW curve depending on the used ruling.

Your printing condition, made in the Print Control Wizard, will be for one specific ruling. If you want another ruling, then duplicate the printing condition and choose the ruling you need. This will result in another curve ("PCW_xx") but will most likely have the same Crystal screen.

Because of the two different rulings, you will have to make a curve strategy in Curve Pilot to combine these two PCW curves for each ruling. Learn below how to make that curve strategy:

Curve Pilot - Make a curve strategy for two different rulings (Example below:  for 150 and 175 lpi)