CFF2 and DDES are packaging CAD formats for diemaking. DXF and DWG are AutoCAD formats for general CAD where DXF is a text file used as an exchange between different CAD systems and DWG is a native AutoCAD binary format.

EPSF is postscript for creating vector-based graphics files. ArtiosCAD can output its native format to these common file formats. The export tuning is used to convert ArtiosCAD line types to line styles of the appropriate format.

DDES3 does not need an export tuning file as its internally mapped.

A user will run an export from ArtiosCAD and select one of the previously configured formats. 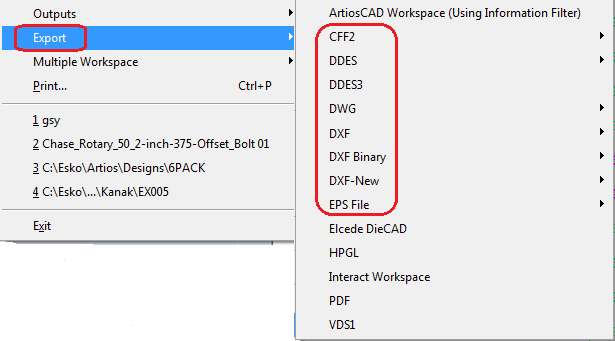 That export will have properties and one of those properties will be a tuning file. ArtiosCAD already supplies a number of export tuning files and configures them with the export. 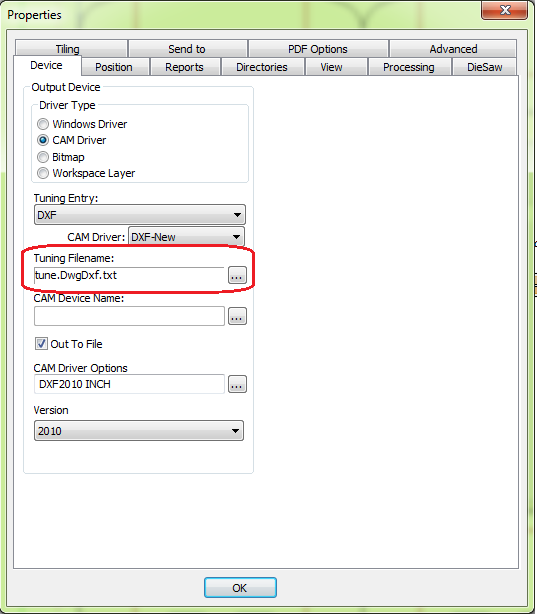 The supplied tuning files should be sufficient in most cases. However, there may be cases where a user will want to change properties or linestyles for the export format. This has to be done manually in a text editor as ArtiosCAD currently does not have a GUI option for export tuning. This article describes how to configure tuning properties.

Each tuning file for the CFF2, DDES2, DXF, DWG and EPSF and outputs consists of a header followed by a list of pairs of lines. The header consists of two lines as follows:

The format of the second of each pair of lines is:

For the current project, the layerclass and iwarning parameters are placeholders that are included for completeness because they are mentioned in the Export Tuning spec. It is intended that they should be implemented as part of the future Export Tuning project.

For special rules, the slot width may be part of the special rule definition for example, wave or zigzag special rule, or uses pointage.

If the wildcard '*' is used, the pointage of the special rule will be used, else the slot width will be mapped according to the user-specified value and entered in the resulting formatted file.

DDES, CFF2, outputs support subroutines, but not when the output is tiled. DXF supports blocks (almost the same thing). If "Use subroutines" is checked on, each subroutine will be output as a block in DXF and DWG.

Selection of Text and Graphics