What are the prerequisites to have Store Visualizer render in stereoscopic mode (3D)?

As soon as you have the stereoscopic license in place, 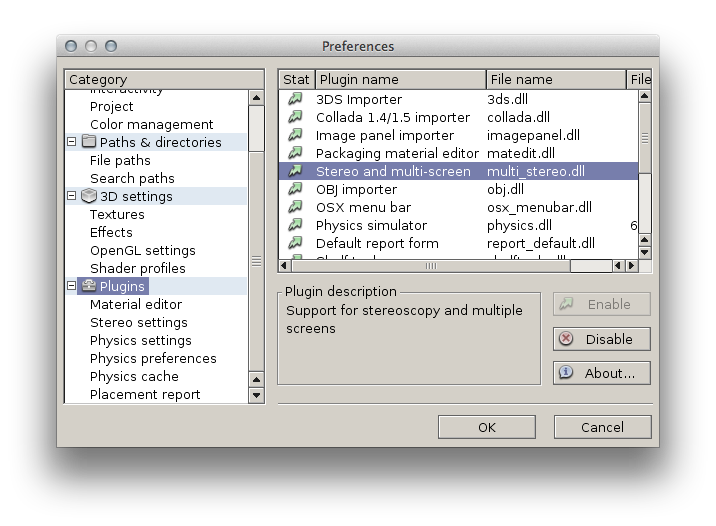 The most important part here is to make sure that the marketing around the term '3D' really means 'full stereoscopic input', which is unfortunately not always the case. This is especially true when talking about projectors/3D TV targeted at consumers. The projector/3D TV must be able to make use of the full stereo signal coming from the Nvidia Quadro graphics card (soon also consumer cards, see below) and display it as-is at the target resolution, without further '3D processing'. It also needs to use a compatible format for the stereo signal itself (so to sync active glasses, for example), as many different and mutually incompatible stereo signaling systems exist.

The above should be checked with the projector/3D TV manufacturer and possibly with NVidia.

Nvidia has its own brand around this stereo technology, NVidia 3D Vision for Quadro (not to be confused with NVidia 3D Vision on GeForce, which is incompatible in Store Visualizer 12.1.1). More information can be found here: http://www.nvidia.com/object/3d-vision-professional-users.html

On this web page, you will find a link to a complete list of compatible components (however slightly outdated).

Here is a list of graphic cards from NVidia that we recommend: Quadro M6000 (professional card, perfect for Stereoscopic) and the NVidia GTX 980 Ti (consumer card, very performant but lower VRAM available).

Nvidia cards are capable of stereoscopic rendering (even in the old days), however (for commercial reasons) Nvidia disabled the stereo mode on all its cards except the Quadro series. It's a driver thing.
This is now changing as Nvidia and many other vendors are now starting to promote stereo for all consumers, both passive and active. So now they will enable (via a driver update) the stereoscopic rendering for consumer cards too, but it requires software developers to rebuilt the software and there are a few restrictions:

Quadro cards also support a number of professional, non-3D Vision compatible setups, as for example solutions from Barco, Christie Digital or similar. Generally these use the Vesa 3-pin stereo output connector, which supplies the stereo sync signals on Quadro cards. However, before purchasing a non-3D Vision compatible system, a customer is strongly advised to discuss compatibility issues with the projection system vendor (and possibly try it out on a demo system).

If your device is indeed 3D Vision compliant AND has a built-in infrared, then the goggles supplied with the TV will work fine.
In case your TV/projector is 3D Vision compliant, but there is no built-in infrared, then you need to buy a specific "3D Vision Pack" from Nvidia (contains infrared and goggles).
Nvidia provides you with two options for the 3D Vision packs, a normal and pro pack, where the cheaper normal pack is infrared based, and the pro pack (a lot more expensive) is radio link based (so you don't need to be in front of the sensor). Both packs were tested on a few devices and work fine.

Note that in case the consumer cards (so not Quadro) requires you to have a new version of the software, in our case the Assembly 5 (January 2014) version 12.1.2 will work with simple graphics cards.
Current version 12.1.1 will only work with Quadro cards, 3D Vision compatible device and 3D Vision goggles. Of course, in all cases, you also require the separate "Stereoscopic" license for Store Visualizer.

From version 12.1.2 onwards, we could also render stereoscopic with any graphics card from Nvidia.

One limitation for all stereoscopic rendering on consumer level cards will be that it only runs in full screen mode.

We advise customers to buy the Nvidia solution as we haven't tested the ATI solution yet.
Nvidia has a website (although with slightly outdated information) that lists 3D Vision compatible devices.

AMD/ATI (not yet advised as it is not tested properly):

Similar to Nvidia, also enabling stereo modes for consumer graphic cards, AMD have created their own brand around stereo called HD3D, similar to NVidias 3D Vision. It doesn't yet seem very widespread though.

Nvidia and ATI solutions are incompatible with each other.

ATI decided to work with the new HDMI 1.4 3D.
If there is inherent HDMI 1.4 3D support in the TV or projector, then the device will come with its own Goggles. These should then work with ATI based setups (although untested as of yet). If the TV is merely HDMI 1.4 compatible without the 3D suffix, then it will most likely not work at all.

Lot more information can be found via Nvidia and ATI websites.